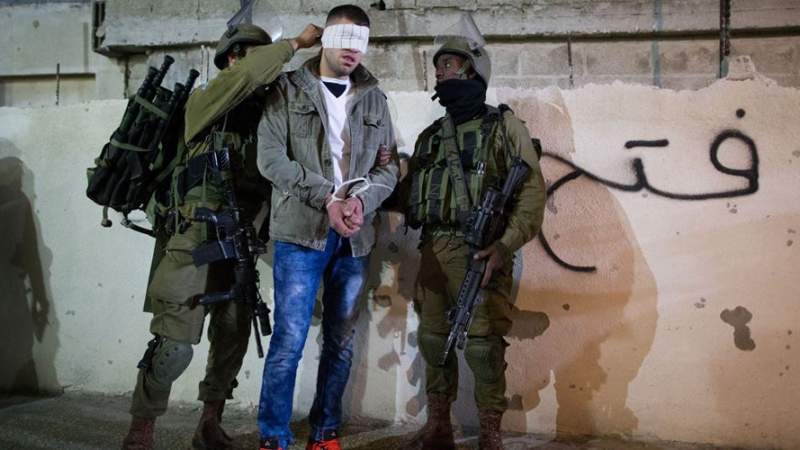 SANAA, Feb. 23 (YPA) – The Zionist enemy forces were arrested at dawn Tuesday 11 Palestinians during a large-scale raid and arrests in the occupied West Bank and al-Quds.

Maan News Agency reported that enemy forces arrested a young man from the town of Hazma, while another was arrested from his relatives’ home in the Shu’fat camp in occupied al-Quds

From Tubas, enemy forces arrested Sheikh Fa’aza Sawafta, a Hamas leader, after storming his house, searching it and tampering with its contents, while arresting a young man from the city.

Dozens of people were suffocated afterthe enemy soldiers fired dozens of gas bombs in the town of Al-Yamun.

According to local sources, more than 30 patrols stormed the town from several axes and surrounded neighborhoods and launched raids and searches targeting freed prisoners from Fatah movement who had detained them with their families and vandalized their homes, and enemy forces arrested three young men from their homes.

In Hebron, another force arrested a boy from the town of Beit Amr after they raided a number of houses of citizens.

A number of Palestinian youths were suffocated during clashes with enemy forces who stormed the Wadi Al-Karm area of Hebron and raided a number of houses and tampered with their contents.

In Bethlehem, enemy forces arrested a freed prisoner from the Saf Street area and two young men from the Hambra area of the city.

Several wounded in missile attack on US embassy in Baghdad

Israeli court reveals when Netanyahu will be tried on corruption charges

Security recruiter killed in Mahra in this way