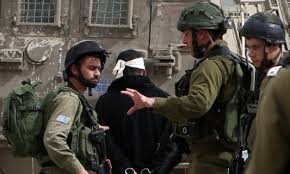 According to the Palestinian sources, The Israeli occupation forces arrested a child after storming the house of his relatives in the town of Ya’abd, southwest of Jenin, and conducting searches inside it.

In the town of Jaba, Jenin district, Israeli forces arrested two young men after raiding their homes, while arresting another young man from his home in Nablus.

The occupying forces also stormed the town of Beit Liqa, west of Ramallah, and Jabal Abu Rumman in Hebron.

They also arrested five citizens of the town of Issawiya, north of occupied Jerusalem, after raiding and searching their homes.