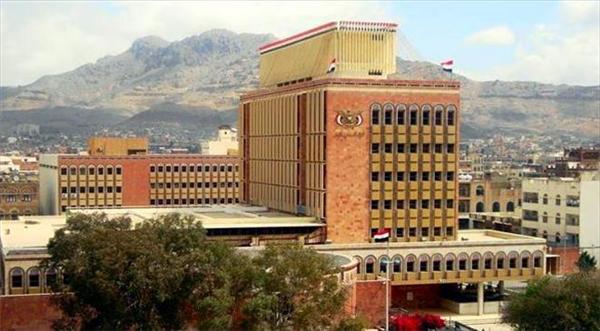 SANAA, Nov. 19 (YPA) – Yemen’s Central Bank issued a statement to denounce the decision of the International Monetary Fund (IMF) that aims to feed the account of the Central Bank branch in Aden with an amount of 300 million dollars from the special drawing rights of the Republic of Yemen starting From next week.

The statement affirmed that the decisions revealed the contradiction of the IMF’s policies and decisions and the duality of its dealings with the same issues according to political agendas, making it one of the tools of the economic war in the hands of the countries of aggression to implement their plans towards Yemen, by providing funds outside the framework of the law to finance military operations and the war on Yemen, and push the national economy and the social situation towards the brink of collapse, as part of the objectives of the military and economic war against Yemen, in addition to financing operations that violate the rules and requirements of combating money laundering and terrorist financing.

The statement noted The Central Bank in Sanaa addressed and informed the IMF of the objection of the Central Bank of Yemen to any decision taken by it to agree to enable the branch of the central bank in Aden to use the special drawing rights of the Republic of Yemen, which imposes illegal financial obligations on the Yemeni people and in violation of the Yemeni constitution, and works to provide financing for the war on Yemen.

Based on the concern for the rights of the Yemeni people and the principles of neutralizing the economy, the Central Bank of Yemen confirmed – in those correspondences, that it should adopt one of the demands contained in those claims, which are as follows:

1. Managing the rights of withdrawal units through a third party to ensure that the value of these units will used to finance commodity imports, and the allocation of the equivalent in Yemeni riyals to pay and cover the salaries of state employees and for six consecutive months.

2. Using the value of the drawing rights units to pay part of the value of the local public debt owed to banks operating in Yemen, enabling them to pay part of the money of their depositors, easing the banks’ obligations and the liquidity crisis they are going through, alleviating the financial hardship of their depositors, and relieving pressure on local currency rates.

3. Stopping any disposal of the Special Drawing Units of the Republic of Yemen, until the end of the aggression against Yemen, in a way that ensures that the entire Yemeni people benefit from the drawing rights units.

The Bank’s statement had previously addressed the House of Representatives and the Ministry of Foreign Affairs to warn against the actions decision by the IMF towards making the Yemeni people financial obligations in violation of the Yemeni law and constitution, and the goals, policies and standards of Fund, especially those related to governance and the rule of law, enhancing transparency and accountability, not duplicating dealing with the same issues, and not granting drawing rights units to countries suffering from political instability.

Accordingly, in the event that the IFM rejects any of the aforementioned demands, the Central Bank in Sanaa reaffirms its total rejection of any decision taken by the Fund regarding the Special Drawing Rights of the Republic of Yemen, and releases it from any burdens that will result from the decision of the Fund, adding that Yemen and the Yemeni people reserve their right legal accountability and prosecution of any entity or party that works, facilitates, or contributes directly or indirectly to the exploitation and waste of the rights and capabilities of the Yemeni people and appropriation of them, to finance the war on Yemen.