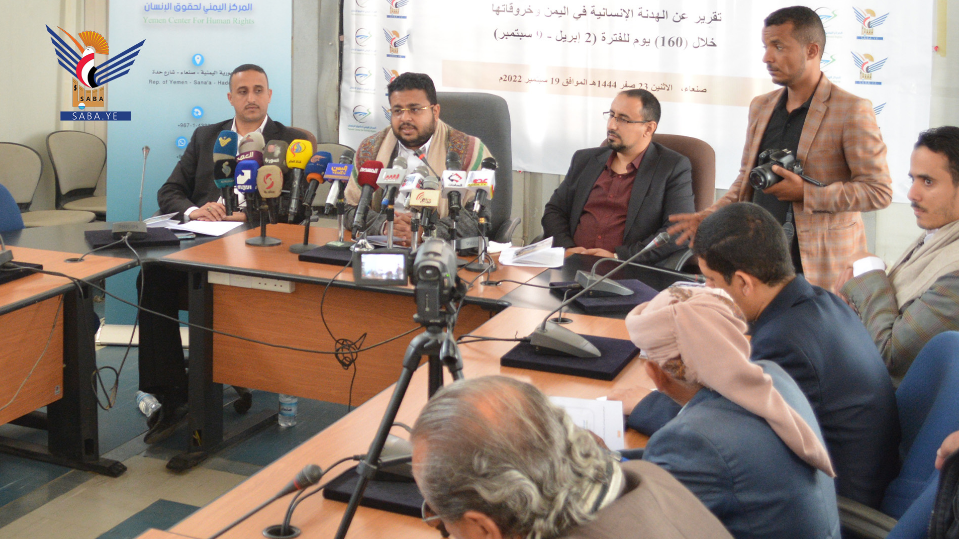 SANAA, Sept. 19 (YPA) – The Yemeni Center for Human Rights in cooperation with the Yemeni news agency, Saba, organized on Thursday a press conference in Sanaa to issue a report on the “alleged truce.. the humanitarian truce in Yemen and its violations within 160 days”.

In the press conference, Chairman of the Board of Directors of the Yemeni News Agency, Saba, and Editor-in-Chief, Nasr Al-Din Amer, indicated that the conference coincides with the celebration of the 8th anniversary of the September 21 revolution and the Prophet’s birthday anniversary, 1444 AH.

Amer also affirmed that the truce also came to prove the good intentions of the Supreme Political Council and the National Salvation Government, in alleviating the suffering of Yemenis.

“The terms of the truce are clear and specific, but the aggression coalition did not abide by them and is proceeding in the same approach by holding the victim responsible and placing him in the position of the executioner and the criminal,” Amer said.

Amer expressed the hope that all media outlets would shed light on the report and highlight any action that shows violations committed by the aggression in light of the truce, stressing the keenness of the Yemeni News Agency, Saba, to monitor violations and link to real sources in this aspect and publish them to all media outlets.

He called on the media to play their role in paying attention and contributing to monitoring violations, noting the importance of publishing the report at this time to inform world public opinion of those who violate the armistice and its provisions.

For his part, the head of the Yemeni Center for Human Rights, Ismail Al-Mutawakel, praised Saba Agency for hosting the press conference and issuing the “alleged truce” report, which monitors the violations committed by the aggression countries over 160 days.

Al-Mutawakel stressed that the UN-declared humanitarian truce, in violation of international humanitarian law, limited the entry of 18 fuel ships to the Yemeni people in the two months.

“A truce in which they spread the big lie by besieging Taiz, demanding to open the roads to it from the north, even though its roads are open to the south and west and from there to the world, unlike the provinces that the aggression has imposed the siege on them from all sides and they do not have a single outlet open to the world,” Al-Mutawakil explained.

He added, “An alleged truce, we decided at the Yemeni Center for Human Rights to expose to the people and the world its falsity and the ugliness of its use by the United Nations and the aggression coalition countries.”

Al-Mutawakel pointed out that the Yemeni people have been deprived of peace for nearly eight years, while the Security Council claims that it is concerned with peace and its protection in the world, but it and the United Nations have repudiated this in Yemen.

He said, “It is the peace that the Yemeni people, leadership, and government call for, and And they accept, in good faith, every peace initiative and a request for a truce, even if it is under unfair conditions to close the door of pretexts. The peace that the aggression countries along with them the Security Council insist on adding their last chance because they disavowed the conditions they announced in their opportunistic truce, which is not humanitarian, the killing of more than 70 innocent people with their missiles and bombs, including women and children.”

Al-Mutawakel stressed that the launch of the report comes as a sense of responsibility in clarifying and conveying the facts to local and international public opinion about the Yemeni issue, which is no longer the forgotten war as it was, but rather has become one of the important issues for many countries of the world.

The Executive Director of the Center, Ismail Al-Khasheb, stated that the truce was marred by many violations and the non-compliance of the parties to the aggression with its terms, to be an alleged truce before the whole world, witnessing the inability of the United Nations to implement the obligations it sponsors.

He explained that the total of military violations of the armistice amounted to 14,421 breaches, causing the death of 70 civilians, including eight of African nationalities, seven children, and two women, in addition to 95 wounded, including 34 children and 18 women.

Al-Khasheb explained that these casualties were caused by 278 air strikes, more than 1,000 artillery shells, and thousands of bullets, as well as 498 espionage reconnaissance flights.

Concerning the entry of oil derivatives ships, he indicated that the aggression countries did not commit to allowing ships to enter the ports of Hodeida under the terms of the armistice, and worked to obstruct and delay them.

He pointed out that the number of flights to and from Sanaa International Airport amounted to 42 out of 48 scheduled flights during the period, with many flights delayed and flights canceled, to and from Cairo Airport.

Al-Khasheb considered the file of opening the roads one of the most difficult files, from which nothing was implemented during the truce period in its stages, referring the reason to the inability of the United Nations to oblige the aggression coalition countries and its mercenaries to implement and abide by it, referring to a unilateral initiative presented by the Salvation Government last June to open Al-Sitteen road in the province of Taiz.

He said: “The strange thing is the fallacy of the UN representative and the media of the aggression that Taiz is besieged, while the reality shows that the mercenary factions loyal to the aggression coalition control large parts of the province, and they have sea ports such as Mocha and Bab al-Mandab, and land crossings to the south through Lahj province, while the closed one, which represents points of contact and a military clash are the northern areas of the province, whose people suffer greatly because they are unable to enter the province except through a long and rugged road filled with military points belonging to the aggression coalition and its mercenaries.”

The director of the center stressed that the continued violations committed by the aggression coalition and its mercenaries demonstrate the lack of seriousness in taking responsibility for ending the war and its disastrous consequences and effects on citizens in several provinces.

He explained that the United Nations did not take any positive steps to mitigate and end the humanitarian catastrophe in Yemen, and did not obligate the parties to the aggression to fulfill their pledges, especially in the second extension of the extended-armistice agreement announced by the UN representative, in which he stressed work on the suspended salary payment mechanism.

Al-Khasheb called on the United Nations and the UN Security Council to condemn the violations of the terms of the armistice and to compel the coalition countries to implement all its provisions, work to alleviate the suffering of the Yemeni people, lift the siege completely, and open all land, sea and air ports without any exceptions in accordance with international law and international humanitarian law.

Judicial Council praises all efforts made to continue working in courts