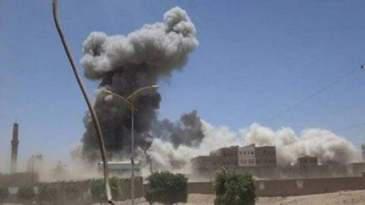 HODEIDA, Nov. 22 (YPA) – The Saudi-led coalition forces committed 327 violations of the Sweden agreement on ceasefire in Hodeida province over the past 24 hours, the operations room to monitor the violations reported on Monday.

Among the violations were an attempt to advance by the coalition forces in Hays district, firing 1,473 rockets and artillery shells in 100 violations, and 158 violations with various gunshots, according to the operations room.

The violations also included four raids by the coalition warplanes on Hays, and three raids by spy planes on Al-Jabaliya area, in addition to 31 sorties by warplanes and 33 others by spy aircraft in the airspace of Al-Faza, Al-Jabaliya, Hays, Al-Jah and Al-Tuhita areas.

#Breaking: A Tweet campaign under Hashtag #USAKillsAndBesiegesYemeniPeople kicks off