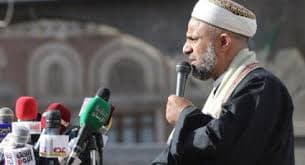 SANAA, Jul. 20 (YPA) – The Mufti of Yemen, religious scholar Shams Al-Din Sharaf Al-Din, affirmed on Tuesday that the Saudi regime’s ban on the Hajj is an US-Zionist plot.

This came during delivering two Eid al-Adha’s religious sermons in front of a thousand citizens in the Great Mosque in the capital, Sanaa.

Sharaf Al-Din denounced the Saudi regime’s ban on the Hajj, stressing that it is a conspiracy against the pilgrimage which the Americans, the Zionists and Western countries are behind.

He also stressed the need for compassion, cooperation, caring for the poor and needy and supporting the fighters from the Yemeni army and popular forces on battle fronts.

Despite the war and the US-Saudi siege on Yemen for seven years, Yemenis insist on reviving religious sentiments, stressing that they will fight the aggressors until victory.