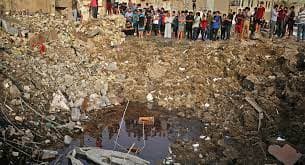 BAGHDAD, Jul. 19 (YPA) – At least 20 were killed and 45 others wounded in a bomb blast in the Iraqi capital of Baghdad’s Sadr city, Iraqi security media  cell reported.

“A terrorist attack by an improvised explosive device (IED) targeted the Al-Wahilat market in Sadr City, east of Baghdad,” the cell said in a statement.

No group has claimed responsibility for the terrorist attack yet.