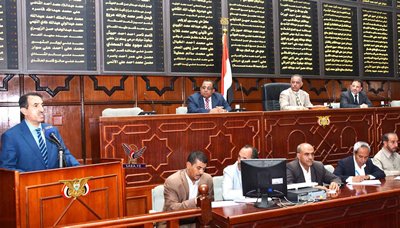 SANAA, Nov. 3 (YPA) – The Yemeni parliament on Saturday resumed holding its sessions under the chairmanship of the Parliament Speaker, Yahya al-Ra’i.

In the meeting, al-Ra’i urged the parliamentary committees to speed up rising the reports relating to the topics referred to them so that the parliament can review and discuss them.

The parliament speaker stressed the need to activate the supervisory role of the parliament and enhancing the national unity “as a front of steadfastness against the Saudi-led aggression coalition.”

“Yemenis are defending themselves and their unity, security and stability and do not assault anyone, al-Ra’i said.

He noted to the big-scale suffering of Yemeni people as a result of the continued US-Saudi aggression and siege for nearly four years.

In its meeting, the parliament reviewed the report submitted by the special committee tasked to investigate the facts about the events of Sanaa University in last month.