WHO sends investigation team to China 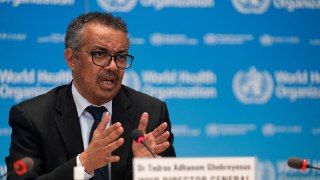 SANAA, June 30 (YPA) – The Director-General of the World Health Organization, Tedros Adhanum Gebresus, announced that next week WHO will send a team to China to investigate the origin of the virus.
“We can better fight the virus when we know everything about the virus, including how it began,” Tedros said.
“We will send a team next week to China to prepare for this,” he added.
It is noteworthy that this step was demanded by the United States of America at the beginning of the debate and accusations between Washington on the one hand and Beijing on the other hand and also the World Health Organization.
Tedros noted that six months after China first reported to WHO about the emergence of a new respiratory infection, the 10 million confirmed infections and 500,000 deaths had been reached.
The organization’s emergency program director, Mike Ryan, said the organization expects to do massive work to find a safe and effective vaccine to prevent Covid-19 disease, but there is no guarantee that this will succeed.
On the other hand, he added, states can combat the spread of the disease by examining, isolating confirmed cases and monitoring contacts.
It mentioned in particular Japan, South Korea and Germany because of its “comprehensive and sustainable strategy” in confronting the virus.
WHO plans to hold a meeting this week to assess progress in disease control research.