Leader of the Revolution: US does not want peace in Yemen because it benefits from the war 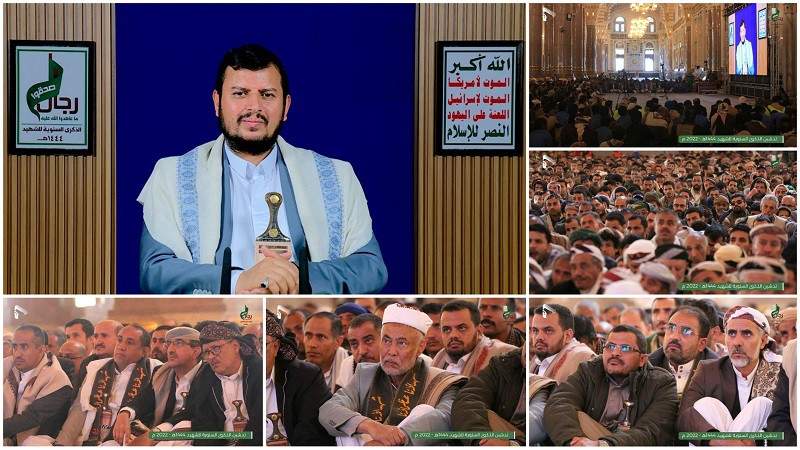 SANAA, Dec. 07 (YPA) – The Leader of the Revolution, Sayyed Abdul Malik Al-Houthi, stressed that freedom of the Yemeni people is not included in a bargaining auction, and Yemen’s political dictionary is based on Quranic values, principles and culture.

This came during his speech Today, Wednesday, to commemorate annual anniversary of the martyr (1444).

In his speech,  the leader affirmed that “The US-backed and Saudi-led military onslaught is aimed at placing Yemen under foreign occupation. Yemenis will not accept Saudi-led plots designed to put the country under Western hegemony.”

“Saudi Arabia and the United Arab Emirates are seeking to enslave the Yemeni nation and plunder the country’s natural wealth. Enemies do not want the salaries of Yemeni civil servants to be paid by means of revenues earned from plundered crude oil and natural gas,” he said.

He emphasized that the Yemeni nation will neither allow the US, Britain, Saudi Arabia nor their allies to gain a foothold in Yemen and build a military facility there.

“The Muslim world will not by any means benefit from victory, honor, growth or prosperity unless peoples get prepared to make self-sacrifices and demonstrate genuine unselfishness,” the leader of the revolution said.

Sayyed Abdul-Malik also warned of enemies’ plots to undermine the Yemeni nation and called on people from all strata of the society as well as the country’s officials to remain vigilant about “the soft war” against the Arab state, particularly in cultural and intellectual spheres.

“Enemies are seeking to diminish Islamic values and misinterpret the notion of martyrdom. They are spending considerable time and effort in order to corrupt young Yemenis,” he warned.

“The United States and the Israeli regime are relentlessly constructing hostile plots against Muslims, and are seeking to sow the seeds of discord and division across the Muslim world, from Yemen to Iraq and beyond.”

He noted that the Muslim world is currently facing formidable challenges, adding that “enemies are greedy…for Muslims’ natural resources, and are seeking complete control over them.”

Sayyed Abdul-Malik also reiterated the Yemeni nation’s firm resolve to stay strong and united, calling on Yemenis to join ranks in the face of enemies’ conspiracies to sow division and sedition within the society.

He strongly condemned certain Arab states for normalization and establishment of full diplomatic relations with the Tel Aviv regime, stating that the treacherous process with result in nothing but division among Muslims.

155 people injured due to collision of two trains in Spain