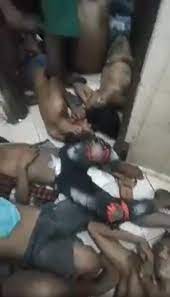 The scenes displayed a number of the bodies of African migrants who were killed by the Saudi border guards, along with pictures of a mass grave containing dozens of African victims.
The scenes showed also that the Saudi border guards handcuffed dozens of Ethiopian immigrants, believed to be moments before they were killed, according to Al Masirah.

“The Saudi border guards kill nearly five migrants daily on the border and injure many of them,” Al-Masira TV quoted several Ethiopian immigrants as saying.

A number of African survivors of the massacres said: “The Saudi soldiers deliberately electrocuted a room after collecting dozens of Ethiopian immigrants in it.”

Ethiopian migrants added to the TV that: “The Saudi border guards shoot directly and often use mortars to eliminate gatherings of migrants.”

20 ones killed, 6 others injured due to bus accident in waterway in central Egypt