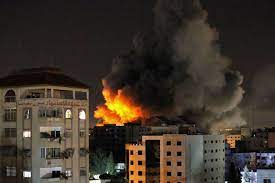 SANAA, Aug. 06 (YPA) – The UAE Air Force has participated in the continuous Israeli aggression on the Gaza Strip, bombing targets of the Palestinian resistance.

A senior Emirati officer told “Khaleej 24” – he refused to reveal his identity- that 3 Emirati warplanes participated in the Zionist aggression on Gaza.

He stressed that the planes included a group of Emirati pilots sent by Emirati President Mohammed bin Zayed to support “Israel” and to train them on manned targets.

The officer revealed that a number of Emirati pilots refused the request, so they were arrested and imprisoned.

He stated that the Emirati participation in the occupation raids was not the first, as Emirati warplanes participated in the 2021 aggression on Gaza. The officer explained that Abu Dhabi and Tel Aviv had recently carried out joint military exercises, including intensive bombing operations on resistance targets in the Strip.

And he indicated that bin Zayed expressed his willingness to raise the volume of military participation and finance the military operation until its completion.

On Friday, the Israeli occupation army began the military operation in the Gaza Strip, which it claimed was against the Islamic Jihad movement, killing 16 peoples, including a girl and a leader in the movement, and wounding more than 55 others.