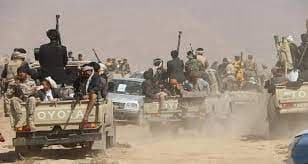 MARIB, Oct. 06 (YPA) – The Yemeni army and popular committees have achieved field military advance on the outskirts of the center of Al-Jouba district in Marib province, after fierce battles with ‘Hadi’s forces’ backed by the Saudi-led coalition.

Hadi’s forces had pushed all their military weight during the past few days to prevent the fall of the southern entrance of Marib city, in parallel with the intense air strikes of the Saudi-Emirati coalition aircraft, which exceeded 35 raids a day.

However, this did not prevent the fall of the positions of those forces in the south and east of Al-Jouba, led by ‘Al-Khshina’ camp, which is the last of their camps in the district, according to tribal sources, the battles moved from the borders between Al-Jouba and Harib districts to along ‘Muthallath Wasit’ area overlooking the center of Al-Jouba.

The sources pointed out that “the confrontations became 5 kilometers from ‘Al-Jadeed’ area, the center of al-Jouba, after their advance on Monday and Tuesday in the areas of ‘Zakhem’, ‘Qaher’ and ‘Al-Qubeil’ mountain, reaching ‘Al-Jarrafa’ area located in the vicinity of the district’s center. They expected Sanaa forces to enter the district’s center easily, after they were able to secure the mountains of Assaid, Alahdhan, Almnaqel and Alhra militarily.

These developments come in light of the reluctance of the ‘Salafi’ movement in al-Jouba to fight Sanaa force, the refusal of some of Murad and Abidah tribes to fight as well, and the approval of the Abdiya tribes on the initiative of ‘Ansarullah’ movement regarding the establishment of peace in the province.

Meanwhile, the leader of Hadi’s forces on Al-Jouba front, Mufreh Buhaibah, who acknowledged the collapse of the advanced defensive positions of his soldiers, spoke of the existence of a “conspiracy within the legitimate forces.”

In this context, Hadi forces’ intelligence department in Marib referred dozens of officers, including brigade commanders, to trial on charges of “treason” and handing over the fronts.