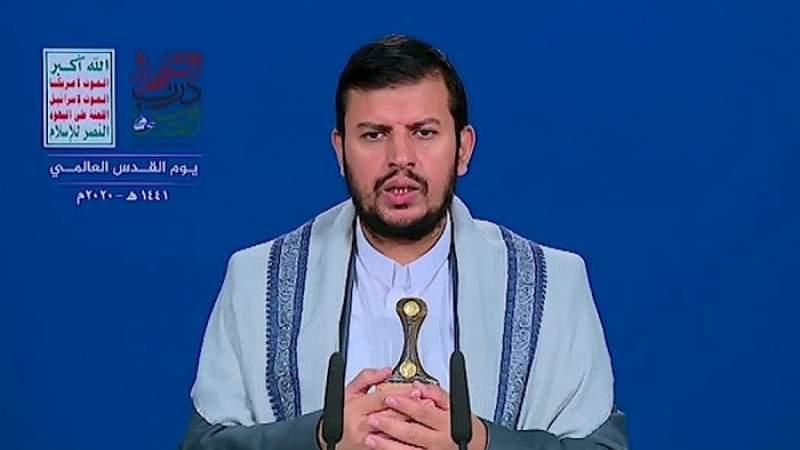 SANAA, May 21 (YPA) – The leader of the revolution, Sayyed Abdul-Malik Badreddin al-Houthi  on Wednesday said that “the World Quds Day provides an opportunity for the liberation of Palestine, the restoration of the holy places and saving the Palestinian people.”

During his speech at the Leaders of the Axis of Resistance festival on the occasion of World Quds Day, Sayyed Abdul Malik stressed that the Yemeni people stand with the Palestinian people in the face of the Israeli enemy as a religious and humanitarian commitment.

He explained that the Israeli enemy is the enemy of the whole nation and represents a threat to global security and stability.

Sayyed Abdul-Malik pointed out that the Israeli enemy posed a threat to the holy places, among them the Al-Aqsa Mosque.

Leader of the revolution said that the crimes of the Israeli enemy had become daily practices, noting that the Palestine cause requires the nation to determine a responsible, decisive, clear and practical attitude towards it.

Sayyed Abdul-Malik further stressed that the people of Yemen are present with the free people of the nation to support Palestine and its holy places.

He condemned the steps of normalization with Zionists, led by the Saudi regime, considering them to be legally forbidden loyalty.

Moreover, Sayyed Abdul-Malik renewed his offer to the Saudi regime regarding the release of Palestinian abductees from Hamas Saudi prisons, stressing his readiness to raise the ceiling of the exchange deal to include Saudi pilots and nine Saudi officers.

“We renew our offer to the Saudi regime regarding the release of Palestinian abductees by preparing to free another pilot and five Saudi officers and soldiers,” Sayyed Abdul-Malik said.

“We hope that the Saudi regime will interact positively with our initiative, if not for the sake of the Palestinian brothers, for its pilots and captured officers,” he added.

In March, the leader of the revolution launched an initiative to release Palestinian Hamas detainees in Saudi jails in exchange for the release of a captured Saudi pilot and a number of Saudi army prisoners.

At the time, Sayyed Abdul-Malik’s initiative was highly valued and appreciated by Palestinian factions, while calling on the Saudi regime to release the detainees.