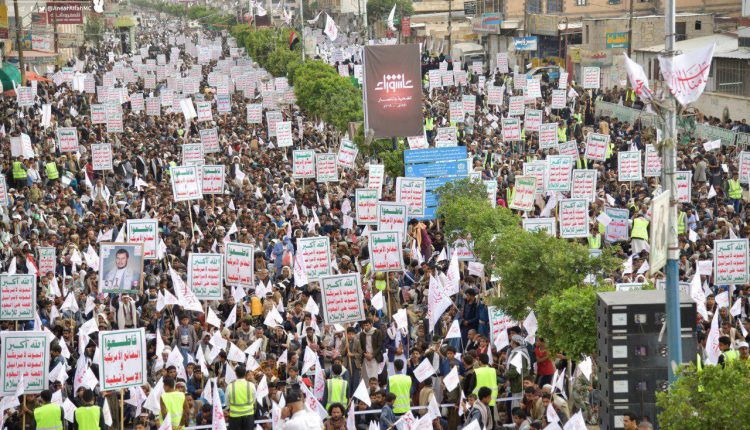 SANAA, Sept. 10 (YPA) – Tens of thousands of Yemenis on Tuesday afternoon participated in a mass rally in the capital Sanaa to commemorate the Day of Ashura, which marks the anniversary of martyrdom of Imam Hussein bin Ali bin Abi Taleb, grandson of Prophet Mohammed.

In the rally, which was attended by dozens of ministers, leaders and social figures, the participants raised the flags of the Republic of Yemen, and banners reminding of the sacrifices of Imam Hussein peace be upon him, as well as slogans condemning the forces of aggression on Yemen.

The participants listened, during the rally, to Sayyed Abdulmalik al-Houthi’s speech he delivered to the nation, in which he commended Karbala Memorial Day in making the awareness and right attitude among the Islamic nation.

Sayyed Abdulmalik considered the day of Ashura a great mobilization station that gives the nation the moral energy to face the challenges and endure sacrifices whatever they.

He stressed the Yemeni people’s steadfastness in confronting the aggression, reaffirming the principled positions in support of the Palestinian cause and opposing American colonial hegemony.

At the end of his speech, Sayyed Abdulmalik expressed the full solidarity with all the free oppressed people in Iran, Lebanon, Syria and Bahrain.