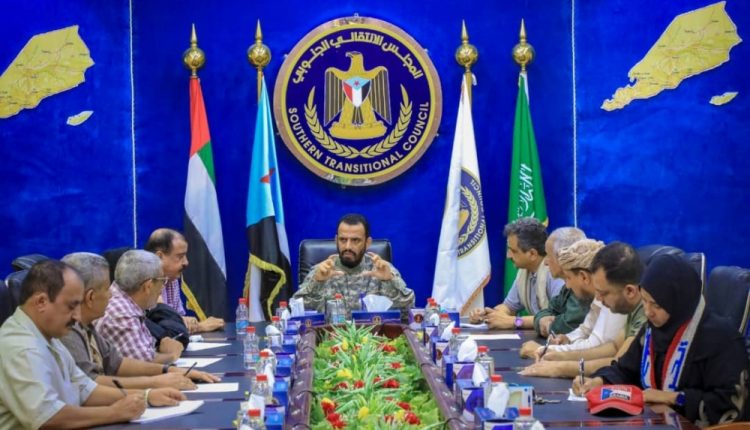 ADEN, Aug.8 (YPA) – The Southern Transition Council (NTC) on Wednesday announced a statement admitting its defeat in front of the exiled Hadi’s forces and the failure to overthrow the Ma’asheq Presidential Palace, in which called his supporters on Wednesday to overthrow him.

It reiterated its loyalty to the fugitive Hadi and the Saudi-led coalition and the UAE against the backdrop of their anti-clashes’ stance in Aden.

In a statement issued by an extraordinary meeting of its presidency, the council justified the movement of its forces and clashes on Wednesday in Aden to what it called “the policies of successive governments in the so-called legitimacy, which increased the suffering of the people because of the lack of responsibility towards our people and the practice of corruption.”

The exiled Hadi’s government “intensified its plots against our southern people, first of all handing over to the frontlines of the fighting on the southern border with the north to the “Houthis”, and on this day carried out a live shooting attack on our unarmed people participating in the funeral of Abu Al-Yamama.”

The NTC admitted its failure to bring down the Ma’asheq Palace, saying: “In the face of these developments, the council’s presidency has endorsed the call for the general mobilization of our southern people and their resistance, and everyone has turned to Ma’asheq to overthrow the government of terrorism and corruption loyal to the terrorist party Al-Islah.”

The council’s presidency also backtracked on its announcement to overthrow the coalition-backed government.
The call for general mobilization was aimed at “putting an end to the absurdity of (Hadi’s government) and affirming the preservation of so-called President Hadi’s legitimacy and ridding it of the hegemony of the terrorist Islah Party.”

The transition council presidency reinforced the declaration of defeat by calling on “leaders, officers and members of southern military and security units to stand up to the right and just cause of the people of the south, and not to be dragged in the face of this right under any circumstances”.

In its statement, the presidency of the Transition Council also called on “governors, security directors, government and service departments in all southern provinces to continue to perform their administrative, service and effective functions and to confront corruption in all its forms, and affirms the council’s responsibility to the people.”

In the face of the announcement of the Saudi-led coalition and the UAE rejecting the movements of the transition forces, the presidency of the latter renewed its loyalty to the coalition, saying: “The Council affirms the continuity of partnership in the war with the Arab coalition countries led by Saudi Arabia and the UAE to fight and stop the expansion of the “Houthi”, and fight terrorism.”

The Council also responded to the condemnation of the United Nations and its envoy for the regional deportation campaigns from Aden: “The Council affirms the protection of the lives, property and all the rights of our northern brothers in the south.” But it has a commitment to a condition that “does not disturb the security and stability of the South.”

#Breaking: A civilian was killed and 3 other were injured in coalition’s bombing in #Hodeidah

Fuel amount entering via land ports does not cover 5% of needs: YPC