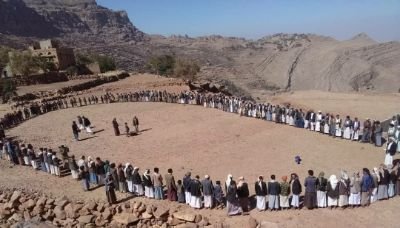 MAHWAIT, March. 14 (YPA) – A tribal rally was staged on Thursday by tribesmen and sheikhs to enhancing steadfastness and sending food convoy to back the Yemeni army in confronting the Saudi-led coalition.

At the rally, the participants stressed the importance of stand and do together to unite the internal front to defend Yemen and its sovereignty.

The tribes affirmed continuing a public mobilization to foil the coalition’s plots that target the Yemeni people and destroy its infrastructures.

The rally greeted the steadfastness of the Yemenis and the great triumphs achieved by the army against the coalition and its militias in the battle  fronts.