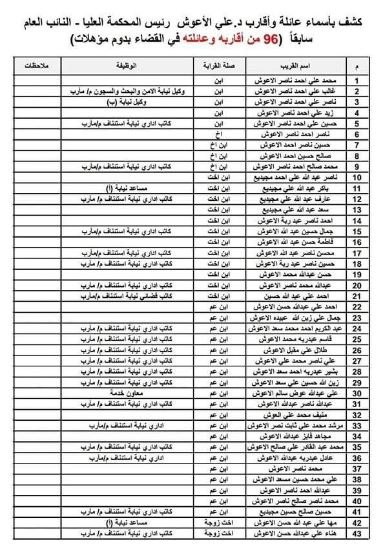 MARIB, Dec. 06 (YPA) – Media outlets have published documents including a new scandal for the government loyal to the Saudi-led coalition, after exposing its officials who looted scholarships for their children and relatives, and depriving other Yemeni outstanding students.

Activists circulated a two-piece list of 96 relatives of the head of the Supreme Court in the pro-coalition government, former pro-Islah Attorney General Ali al-A’wash, who hired and appointed them in positions in the judiciary in Marib governorate without qualifications.

The names in the disclosure show that al-A’wash hired all members of his family during his tenure as attorney general. His appointment by the fugitive Hadi sparked differences between Islah and the UAE-backed Southern Transitional Council (STC).

This is yet another testimony to the Islah Party’s tampering with the public service and its exclusion of the people of other provinces from their legitimate right to jobs.

US, EU do not push Ukraine to implement Minsk agreements

About 4.5 million people in Yemen suffer from disabilities due to war: ICRC