US failure to subdue North Korea. Who starts pulling the nuclear trigger? 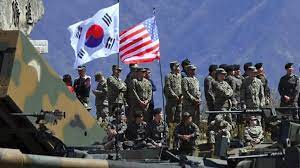 SANAA, Dec. 05 (YPA) – No one is harmed by North Korea’s nuclear arsenal, except for the United States and its allies in South Korea and Japan.

Washington is trying in various ways to turn international public opinion against North Korea, incite its southern neighbor in addition to Japan, Pyongyang, and portray it as a common enemy, while North Korea has not waged any catastrophic war or fueled various conflicts in the world, similar to what the United States is doing. United.

Imposing standards of force.. Yemen as an example.

In a world turbulent and subject to the standards of military force have imposed by the United States on the world since the invasion of Iraq in 2003, it does not seem that anyone will be ready to get rid of any military force, relying on the rule of international law. There are vivid examples in the world confirming that countries’ possession of military deterrence capabilities represents the most important protection factor in confronting American arrogance.

For example, the war that Yemen is being subjected to at the hands of a US-sponsored coalition is evidence of the state of moral collapse led by the United States for American hegemony in the Middle East. This prompts the countries of the world to develop their military capabilities in order to deter the volatile mood that Washington seeks to impose on the international community.

North Korea announced today that it had fired more than 130 artillery shells into the sea off its eastern and western coasts, after monitoring cross-border military exercises in the south and some landed in the buffer zone near the inter-Korean sea border.

What North Korea did is a natural reaction, after its south neighbor and America, conducted joint exercises on Monday, near the border in the “Chorwon” region in the center of the Korean Peninsula, and their maneuvers will continue until on Tuesday.

In light of the escalation of the conflict between North Korea and its southern neighbor, it seems that the US sanctions against Pyongyang are useless, which prompts the two allies to respond to North Korea’s missile tests by conducting military maneuvers and launching ballistic missiles, all of which fall into the sea.

It is no longer a secret that North Korea possesses nuclear weapons, and it cannot abandon them, regardless of the language of threats or temptations.

Last May, South Korea offered, through its president, huge economic aid to Pyongyang in exchange for its nuclear disarmament, on the grounds that its “missiles threaten regional security” from Washington’s view. “If North Korea honestly embarks on the denuclearization process, we are ready to work with the international community to present a bold plan that will significantly boost North Korea’s economy and improve the quality of life for its people,” the South Korean president said.

Last October, the escalation between the two Koreas reached its peak, when the North launched a medium-range ballistic missile that flew over Japan for the first time in five years, in response to, America to launch two ballistic missiles.

The language of threats fails.

America succeeds in attracting allies against North Korea; But it fails to subjugate it. Last Friday, Japan, the United States and South Korea tightened their sanctions against North Korea to curb Pyongyang’s weapons programs, after its recent test of intercontinental ballistic missiles last month.

On Friday, the Japanese government decided to freeze the assets of two commercial companies, in addition to one individual, for their participation in North Korea’s nuclear and missile development programs, according to the Japanese “Kyodo” news agency.

North Korean President Kim Jong-un’s latest statement, which he made this week, said that the entire US territory is within range of his country’s missiles, after the launch of an intercontinental ballistic missile.

President Kim’s statements do not take a pacifist diplomatic course. The strong leader speaks openly about Korea’s nuclear power, and even has confirmed repeatedly that they seek to make Korea the most powerful nuclear, as he said last November, “The building of nuclear power aims” to protect the dignity and sovereignty of the state and the people, in a reliable way,” and that “(his country’s) ultimate goal is to possess the most powerful strategic force in the world, the absolute power that has not been seen before in the century.”

Even today, America and its allies remain in a vicious circle, in the face of the rise of Korean power, once by appeasement, other by threat and sanctions. All of these methods are no longer sufficient to rein in North Korean power, which is bringing America and South Korea back to the line of military display of maneuvers and pouring out their anger at sea.

Al-Bahsani warns UAE against forming any establishing militias in Hadramout

US delegation arrives again in Hadramout