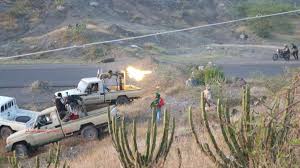 DHALEA, Nov.24 (YPA) – An officer was killed and 5 others were wounded in fierce confrontations that reputed on the fronts in the northwest of Dhalea province,south of Yemen.

Local sources said that the battles broke out after members of the coalition recruits launched a large-scale military attack on the positions of the Sanaa forces in Quta Hajer front.

The coalition’s artillery fired towards several sites of Sanaa forces and citizens houses, the sources added.