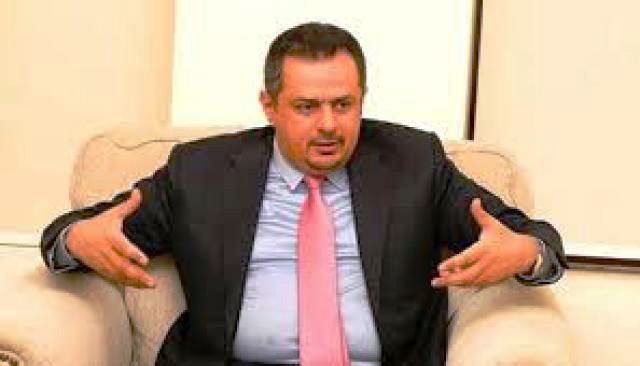 ADEN, Nov. 23 (YPA) – The coalition-backed government, headed by, Maeen Abdul-Malik, and Oil Minister, Saeed Al-Shammasi, got a minimum of 8 billion and 480 million Yemeni riyals, in a corruption deal, in the city of Aden, south of Yemen.

A diplomat loyal to the coalition, Anis Mansour, revealed on Wednesday on Twitter, Maeen Abdul-Malik insisted on renting a Greek ship through an intermediary company, with a worth $8 million, which was paid in advance by his government, in exchange for the looting of nearly 2 million barrels of crude oil through Dabba oil port in Hadramout, during the past two days.

He added that the largest corruption deal that Maeen Abdul-Malik , made during the past days in the city of Aden, which would have contributed to solving many of the problems of basic services in Hadramout.

Mansour said that the coalition-funded government lost $8 million, and did not care about that, indicating that for the first time in the history of oil export, the oil importing company had been not bear any transportation costs.

Last Monday, Sanaa forces prevented the oil tanker, Pratika, from looting 2.1 million barrels of crude oil from Dabba port on the Arabian Sea in Hadramout with an estimated value of $174 million, and forced it to leave the port.

The military spokesman for the Yemeni armed forces, Brigadier General Yahya Sarie, explained in a news statement that the oil tanker refused to respond to the Sanaa warnings, and the coalition’s attempts to hide behind to loot Yemeni crude oil failed.

The statement confirmed that the Yemeni forces to continue to protect the sovereign national wealth until its revenues serve the Yemenis and to cover the salaries of all employees in all Yemeni regions.

For its part, the Economic Committee of the Sanaa government demanded, last Monday, that local and foreign companies fully comply with the decision to prevent the looting of Yemen’s sovereign wealth, and that Sanaa should not bear any responsibility for the various repercussions.

The coalition-backed government brought the oil tanker, PRATIKA, accompanied by two vessels, and six unnamed warships, to Dabba oil port, in an attempt to loot Yemeni crude oil and sell it to the European Union countries.