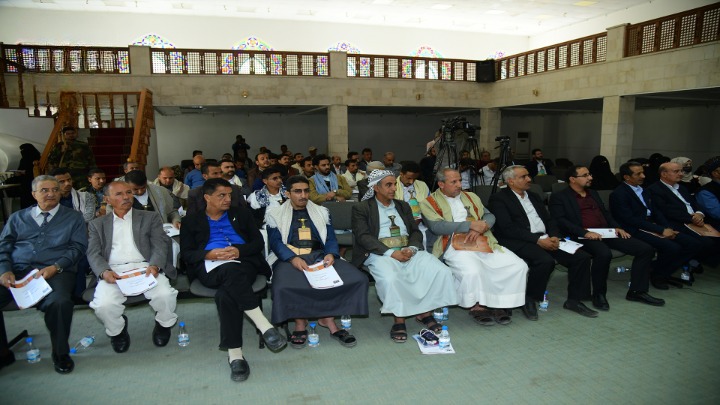 SANAA Nov.17 (YPA) – Al-Hodhod Center for Archaeological Studies organized on Thursday in the capital Sana’a a special event to celebrate the issuance of the report “Yemen’s Archaeological Memory between Smuggling and Westernization”.

The report monitors and documents the looted Yemeni antiquities that were displayed in the most prominent international auctions during the period (1990-2022).

At the event, the official in charge of the education, culture and media sector, Hassan Al-Saa’di, referred to the depth of civilization in Yemen, which is rich in a multi-human heritage, scholars, thinkers and researchers in various sciences and knowledge, and has an honorable and deep history that goes deep into antiquity.

Al-Saa’di pointed out that America and countries that do not have civilization, culture and history deliberately distorted and struck the history and civilization of the nation to obliterate its identity and plunder its wealth, including its cultural heritage, stressing the responsibility of the people of Yemen to protect their history and preserve their heritage and prevent any plans to destroy, smuggle and sell it.

He stressed the need to update and activate laws related to this aspect in order to fulfill their purpose in contributing to the continuous documentation of antiquities and heritage, monitoring looting and smuggling operations, recovering smuggled pieces, and holding accountable and prosecuting those who traffic in Yemeni antiquities.

For his part, the Minister of Culture, Abdullah Al-Kibsi, praised the efforts of those in charge of the center, which is one of the factors supporting the Antiquities Authority in preserving the heritage of Yemen, which was subjected to looting, smuggling and distortion over historical periods, most notably the British occupation and the 1994 war and the stage of aggression that targeted the heritage, identity and history of the country, especially in the southern regions, through robbery and looting by the tools and mercenaries of the Saudi-led coalition.