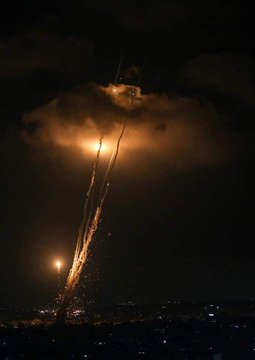 Video | Media coverage: "The Palestinian resistance pounds with a barrage of rockets the colonial Israeli settlements of Sderot, Ashkelon and Ashdod in response to the ongoing Israeli aggression on Gaza."#GazaUnderAttack pic.twitter.com/0amHeT5yTv

In this regard, Al-Quds Brigades, the military wing of Islamic Jihad, fired missiles at Tel Aviv, Ben Gurion Airport, Ashdod, Beersheba, Ashkelon and Sderot in the context of “Unity of Battlefields” Operation.

The following video shows Palestinian missiles being fired and the losses inflicted upon a factory in Nir Oz settlement.

2 children injured due to landmine explosion in Hodeida