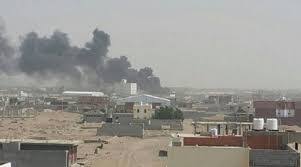 SANAA, June. 23 (YPA) – The Saudi-led coalition and its tools have committed 175 violations of the UN-brokered humanitarian and military truce during the past 24 hours.

A military source said that the violations were included 2 air raids by armed reconnaissance aircraft on Al-Nijjah of Al-Fakher district of Dhalea province, which led to the injury of three citizens.

Moreover, the coalition forces established combat fortifications in the vicinity of the city of Marib, Al-Kadha and Tabat Al-Hadari area of Osayfara district and Tabat Abu Mohammed Baleyn of Taiz, and the area of Lafa Al-Soudah in Jizan, as well as to foiling an infiltration attempt carried out by the coalition towards Sanaa forces’ sites in Jabal Habashi area of Taiz.

The source indicated that the coalition forces heavily fired artillery at the sites of the Sanaa forces in the areas of Al-Akad, Al-Balaq Al-Sharqi, and Malaa of Marib, in additional to the areas of Haradh and Bani Hassan of Hajjah, and al-Madafan, Al-Maladh, Monabih and Razih of Saada and others in Bayda.

Mercenaries refuse to talk about exit of foreign forces: Al-Ajri