TAIZ, Jun. 10 (YPA) – The city of Taiz, in southwest Yemen, witnessed on Thursday massive mass rallies denouncing corruption and calling for the dismissal of the local authority, holding the corrupt accountable, and improving the economic situation.

Hundreds of citizens participated marched in Jamal Street, in central of the city, to protest the spread of corruption and the deterioration of basic services in the city, and the failure of the local authority loyal to the Saudi-led coalition to respond to the citizens’ demands.

The demonstrators raised banners calling for the dismissal and trial of all corrupt leaders affiliated with Islah party in the local authority. They also demanded the provision of all services, the control of the prices of basic commodities, and the trial of revenue looters.

In the same context, protesters also set up the first tent in front of the local authority building, in preparation for the start of a peaceful open sit-in until all their demands are met. 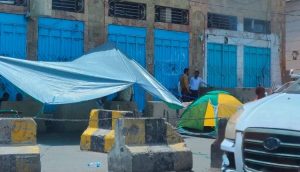