SANAA (Yemen Press Agency) – President of the Supreme Political Council Saleh al-Sammad met here on Wednesday with a number of sheikhs and dignitaries from Bani al-Hareth district in the capital Sana’a. 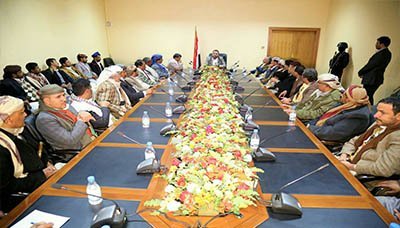 SANAA (Yemen Press Agency) – President of the Supreme Political Council Saleh al-Sammad met here on Wednesday with a number of sheikhs and dignitaries from Bani al-Hareth district in the capital Sana’a.

The meeting discussed the repercussions of the unfortunate events that took place in the capital Sana’a in early December and the effects they had left on the various tracks, in the forefront is the service aspects, especially those that were subjected to acts of destruction as a result of the continued aggression.

The president pointed to the role of Bani al-Hareth tribes in the revolution victory and in purging Sana’a of corrupters, maintaining the revolution’s gains and confronting the aggression.

He indicated that this struggle was crowned with the pioneering position of this tribe’s sons in facing the recent sedition.

“ It was wanted for the capital Sana’a to become like Aleppo in Syria,” al-Sammad said. “There was international supervision for this scheme since more than a year.”

The president continued:“ We know what Sana’a occupation means.. the generations would suffer from this occupation a generation after generation.”

He affirmed that there was a scheme inside the capital Sana’a, where there were more than 6,700 recruits prepared in groups to take points and control over the institutions.

The president voiced his hope that the coming phase will see positive steps toward activating the role of services in the various fields, as well as the continuation of supporting the fronts with money and men to defend the homeland and its security and stability.

The sheikhs and notables of Bani al-Hareth district congratulated the president on ending the sedition and aborting the aggression conspiracy.

They confirmed that they will remain steadfast and will work on reinforcing the honor fronts with money and men and supporting the political leadership in all its reforming steps.

Governor of Dhamar sworn in before President