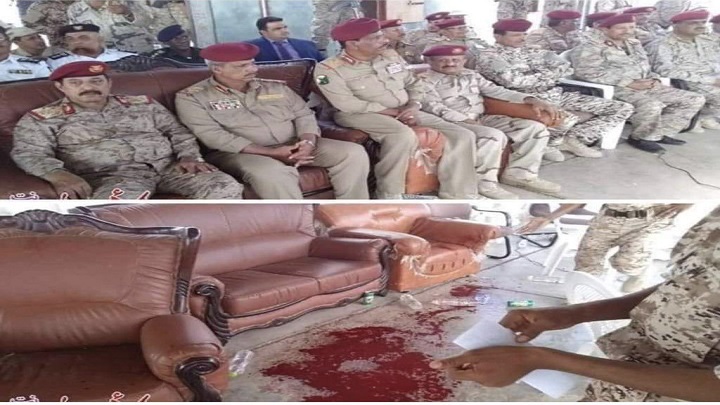 LAHJ, Jan. 13 (YPA) – The head of military intelligence appointed by the coalition died of his wounds sustained in the attack carried out by the drone of the Yemen army on the base of Al-Anad in Lahj province.

The media quoted an unnamed Yemeni official in exiled Hadi’s government as saying that Major General Mohammed Saleh Tamah died after being wounded in the attack on the Al-Anad air base last Thursday.

On Thursday, the Yemen military air force launched an attack on a gathering of invaders and militias’ leaders at al-Anad Air Base by Qasif-2k drone.

The spokesman of the armed forces, Brigadier Yahya Sarea said that dozens of senior leaders of the militias fell between the dead and wounded by targeting them in the military air operation.

He explained that Qasif-K2” drone has recently entered the service. It bursts with fragments from the top to down at a distance of 20 meters, and is able to carry a large quantity of explosives.

The air strike was a popular welcome because it was a major turning point in the face of coalition. It was able to penetrate advanced missile defense systems at Al-Anad base and hit the forces of coalition with panic and fear.

The air strike was followed by another blow on Friday on Saudi Arabia targeting Saudi military leaders at a military base in Asir, killing and injuring dozens in the enemy’s ranks. This confirms the efficiency of the Qasif-2k drone and its ability to hit hostile targets anywhere At any time.