– Western media never mention the public statements by Al-Qaeda leaders pledging to join Saudis in attacking the new Yemeni political leadership, especially the Ansarullah movement.
– The media here ] In Sweden [hide all government institutions in Sana’a and never speak of any functioning government nor of the serving president, His Excellency Saleh Al-Sammad.
– The war against Yemen is illegal, as there is nothing in the UN Resolution 2216 providing for it.
– No resolution or action by the UN allows for creating a humanitarian disaster.
– The official policy in the West that is totally with the British and with Saudi Arabia is based on lies.
– In this global struggle, Yemen is assuming a role in the winning side
– The Pakistani support for Al-Qaeda is more a marker for their dirty cooperation with the Saudis under the permissive eyes of the British
-The use of Daesh and Al Qaeda criminals is most embarrassing for the whole Saudi Coalition.
– So far, what have been brought against them, for their Yemen war, has been the horrific humanitarian crisis they have caused. 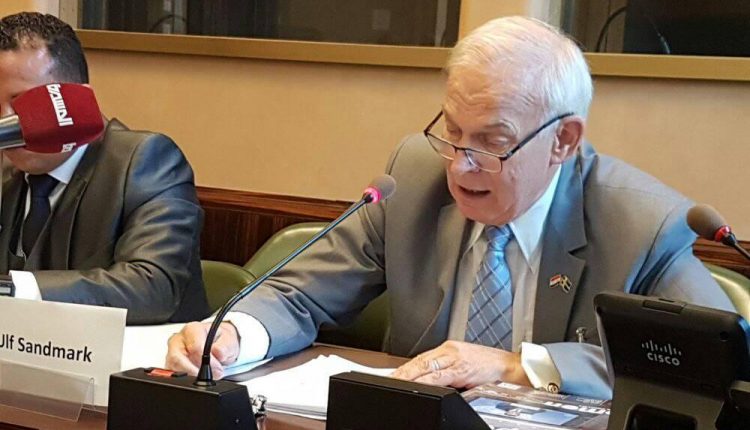 Here is the full text of the dialogue, which is conducted by Yemen Press Agency with the Swedish activist, Mr. Ulf Sandmark, as follows:

Q1: How do you see “western politics and human right activists” reaction on the US-backed Saudi-led aggression on Yemen, and how are their reactions toward Yemen’s retaliation ballistic missiles being fired on Riyadh and United Arab Emirates?

A1: My view, as most Human Rights activists active to stop the war against Yemen, is that the war against Yemen is illegal, as there is nothing in the UN Resolution 2216 providing for it. And certainly not for the blockade. No resolution, or action, by the UN allows for creating a humanitarian disaster.

The official policy in the West is totally with the British and with Saudi Arabia. It is based on lies, where the missiles just become another proof of Iranian military support to what is called the “Houthi rebels”. People here think the missiles, in spite of the blockade, are imported from Iran, as they are not told about the huge amounts of weapons that was brought to Yemen before the war and certainly not about the missile technology imported then. They do not think Yemen has a real government in Sanaa and a real government army. All they see are just pictures of Yemeni fighters dressed like tribal warriors, fighting soldiers in uniforms said to represent the Yemeni government, even though it is mostly Saudi uniforms. The news media here hide all government institutions in Sanaa and never speak of any functioning government nor of the serving president, His Excellency Saleh Al Samad. Instead they show the exile government meeting statesmanlike with flags in rooms furnished like ministerial councils.

Q2: Can you introduce yourself to the readers of the Yemen Press Agency other than what you have told Tasnim news agency

A2: Being active since many years with the international Schiller Institute for a new just world economic order, I was approached by an old Yemeni friend and asked to support the Yemeni people against the Anglo-American-Saudi imperial war. I was invited to speak at the two-day conference held in London 2016 and later also to seminars about Yemen at the Office of the United Nations High Commissioner for Human Rights (OHCHR) in Geneva. I became then a cofounder of a Swedish association working in Solidarity of Yemen against the current war of aggression, against the Swedish weapons trade to Saudi Arabia, to end immediately the siege and start relief deliveries, reconstruction and development.

Q3: As a humanitarian activists, the US backed Saudi-led aggression has caused a catastrophe due to the ongoing sea and air ports blockade? Why the UN Humanitarian agencies are silent on such blockade?

A3: After three years of horrible war against Yemen, the whole world knows that there is a humanitarian, economic and cultural catastrophe in Yemen. This is the result of the reports by the Yemen authorities, by limited but important media allied with the Yemeni cause, as well as from the UN and other Humanitarian organizations, who actually do speak up about the crisis and against the siege. The nations responsible for the war do feel pressure, and a sign of that is that they have started to speak about giving huge aid packages. Even Saudi Arabia has been forced to come forward talking about a USD 1.5 billion humanitarian aid package for Yemen.

I think that any humanitarian aid reaching into Yemen must be welcomed. Especially as the results of the Saudi relief will show how limited the share of the Yemeni people, whom they will be able to reach with this aid. It will expose even more, that the government led by former caretaker president Abdo Rabo Mansour Hadi, whom they support, is playing no role whatsoever in defending the welfare of the people of Yemen. It will show even more, that Hadi and the Saudis can do nothing to aid Yemen, except for stopping the aggression, ending the siege and start recognizing the Yemen government in Sanaa.

Q4: The US and its proxies in the Arab world and Gulf in particular are not winning this war? From your point of view, why?

A4: The heroic Yemeni resistance, just like the heroic Syrian nation, are defending themselves against a losing old Anglo-American neocolonial order. Since the fall of the Soviet Union, these true imperialists have given themselves the right to dominate the world, looting whatever they need to prop up their failing banking systems and imposing regime change wars against nations resisting their dictates. This neocolonial system is now losing its grip over the planet, as more and more nations are joining those huge BRICS-nations who are cooperating to build up their nations for production and welfare. China´s One Belt, One Road and Maritime Silk Road launched 2013 have emerged as the Belt &Road Initiative with more than 70 nations joining. This is establishing a new paradigm of cooperation among nations based on mutual benefit, instead of the evil old order based on geopolitical policies of divide and rule. The victories of Syria, under the leadership of President Hafez Assad with its allies, for the defense of the New Silk Road could be compared to the Second World War victory in Stalingrad. The struggle by Yemen, under its serving president and the broad government coalition including the Ansarullah Movement, could become as important for the Maritime Silk Road.

The Western powers still use their formidable military power putting pressure on Russia and China to back down to the brink of nuclear war. Such nuclear brinksmanship is resisted by the BRICS and also saner forces in the West, who revolt in elections against their governments demanding a stop of the endless wars in especially West Asia.

In this global struggle Yemen is assuming a role in the winning side. The side growing stronger every day by building a new system of mutually beneficial relations among sovereign nations. However, not much of those allies are seen in the daily Yemeni struggle for material survival and victory against the war of aggression. But this now mostly invisible alliance should be nurtured so it materializes and steps forward into an open international support for Yemen. In this way Yemen will have more allies to end the war and to provide relief, vigorous reconstruction and new development.

Yemen has its most important role for its potential allies in the whole world, as a guardian of the peaceful use of the Maritime Silk Road. Promoting that is extremely important for a war winning strategy to get allies among the nations joining the Belt &Road Initiative. More regional allies could step forward i Yemen developed plans for the high tech infrastructure projects of the land based New Silk Road. If Yemen reaches out to its potential allies with plans for building their links for transport corridors through the whole region, the victory of Yemen will be important also for its neighbor nations bringing them, in spite of the war, inspiration and hope, especially for their youth.

A5: The Pakistani troops are bad news. The Pakistani support for Al Qaeda is more a marker for their dirty cooperation with the Saudis under the permissive eyes of the British. The more direct terrorist danger against Yemen, is the danger of redeployment by the Saudi Coalition of their terrorist mercenaries Al Qaeda and Daesh from Syria. According to news report from Al Masdar and SANA, Daesh terrorists in Syria have been removed at the end of 2017 by helicopter from Raqqa and Deir Ezzor by American forces to be deployed into Afghanistan: https://www.almasdarnews.com/…/us-helicopters-spotted-al-h…/.

There is a great danger that these now unemployed terrorists will also be sent to Yemen, just like the 500 Dash terrorists, who were moved from Syria to Yemen in 2015. On October 27, 2015, the spokesman for the Syrian Arab Army reported that “four planes arrived in Aden Airport in Yemen, October 16th, carrying terrorists from Daesh. The spokesman said that the planes, which consisted of 2 Turkish Airlines planes, 1 Qatar Airways plane, and 1 Emirates airline plane, were carrying more than 500 Daesh members who had fled Syria following the Russian airstrikes.” He went on to say that “upon arrival in Aden, the Saudi alliance officers divided them into three groups … to join the alliance’s forces which had sustained great losses during their battles there.”

The report was not mentioned in the Western media, but the fact that Daesh terrorists gained influence in Yemen at the time besides AQAP, was confirmed by Reuters on June 30, 2015. Without mentioning any airlift from Turkey Reuters reported about the Daesh growth to rival AQAP in Yemen. The article stated straightforwardly the role of the terrorists in the Saudi-led alliance: “AQAP still participates in almost daily battles with the Houthis alongside tribal fighters, Southern Resistance forces and supporters of exiled President Hadi.”

Never mentioned in Western media were the public statements by Al Qaeda leaders pledging to join the Saudis in attacking the new Yemeni political leadership and especially the Ansarullah movement. Al Qaeda became part of the foot soldiers of the Saudi-led alliance and was never attacked by the Saudi air force, restoring its presence in Yemen with the help of the war.

The Western powers of the Saudi Coalition and their weapons suppliers stand exposed on the home fronts for the use of terrorists as mercenaries for their regime change warfare in Libya, Syria and Yemen. As these wars ostensibly are to stop terrorism after the 9/11 attacks against New York and Washington, this a very sensitive issue.

So far, what have been brought against them, for their Yemen war, has been the horrific humanitarian crisis they have caused.

I believe that beside that, the use these Daesh and Al Qaeda criminals is most embarrassing for the whole Saudi Coalition. I think all evidence about that should be collected and distributed to all friendly media. What is needed are not the ugly pictures, but short explosive summaries of the evidence of victims and crimes, together with confessions, networks, trainers, camps, weapon suppliers, western agents, etc.

A lot of these Daesh and Al Qaida terrorists have been trained and working for British, American and French intelligence through many wars. They are the biggest connection to the most gruesome crimes of the imperialist regime change wars. They could even themselves be made to understand, that they are in danger of being eliminated by their former employers who have fooled them all the time and want to shut them down when they are not of any use. All kinds of information about the terrorist mercenaries should be professionally compiled. But not only for their prosecution These reports and proofs should be made available to international experts and investigative journalists, to be used for tribunals and indictments of the responsible Western politicians and their complicit military or intelligence officers.

Pyongyang renews threat to close its liaison office with Seoul