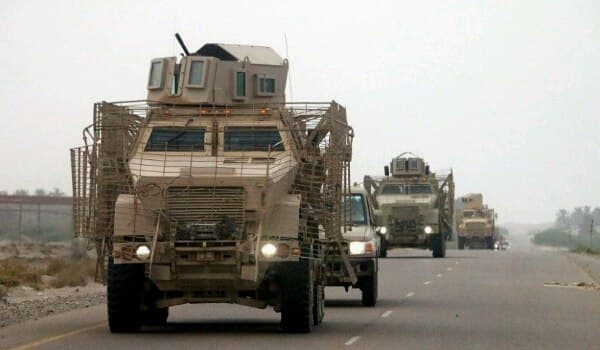 SANAA, Nov. 15 (YPA) – The humiliating withdrawal of Saudi-led coalition militants from the West Coast is the first nail in the coffin of the UAE occupation.

In a news analysis issued by Yemeni Press Agency affirmed that the withdrawal of the forces of Tarik Afash, backed by the UAE occupation from the western coast came as an inevitable end imposed by a number of matters, perhaps the most prominent of which is that these mercenaries have no place in a country like Yemen, which has its historical extensions and its honorable role in fighting the invaders and colonizers.

It is true that the UAE has played its tail a little in Yemen and entered into an adventure that led to become as the actual ruler of the dismantling of Yemen, but this shameful and humiliating withdrawal will be the first nail in the coffin of the Emirati colonialist.

This country, UAE, which has been established to play a functional role in serving the US and Western colonial interests, acts as an investment vessel, smuggling and money laundering.
The UAE and Saudi Arabia exchange roles in Yemen to save and implement their colonial agenda in the country.

The Emirates established in Yemen a force out of nowhere, financed and armed it to serve its ambitions in the country, a herd of mercenaries led by the UAE-backed Tariq Afash.

In addition, the mercenaries have no cause and do not serve a homeland or national sovereignty, but they are fighting to achieve Emirati colonial ambitions in the Yemeni land and wealth.

These mercenaries is present throughout history in many countries of the world, after being mentioned as living beings who do not work to support a cause or principles, but for money.

Today, those the mercenary groups are receiving instructions from Abu Dhabi to withdraw from the western coast, after being recruited as tools to implement colonial agendas.
Historically Yemen will remain, resistant to colonizers and a graveyard for invaders.