US lawsuit lodges against Saudi Arabia 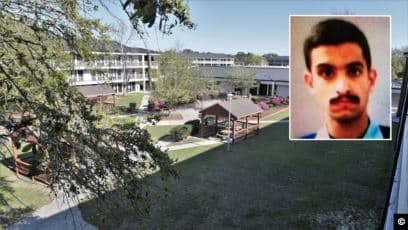 SANAA, Feb. 23 (YPA) – A number of families of the US victims, who were killed by Saudi soldiers at a military base in Florida city of USA, lodged a legal complaint against Saudi Arabia, according to the plaintiffs’ attorneys statement on Monday.

Muhammad Al-Shamrani, who was served as lieutenant in the Saudi forces, shot on December 6, 2019, fired at American soldiers during a semester organized at the US Naval Base in Pensacola city, killing three people and wounding eight others before he was shot dead by police.

The lawyers explained that their plaintiffs considered the Kingdom did know that Al-Shamrani was an extremist.

The lawyers affirmed that Al-Shamrani “was supposed to undergo a comprehensive investigation when he joined the Saudi Royal Air Force, and Saudi Arabia was aware of his extremism and anti-Americanism.

The ٍSaudi king Salman bin Abdulaziz and his son, Mohammed bin Salman, refused to fulfill their promise towards the families of the victims, after President Donald Trump reassured these families that the Kingdom would take care of them.

After the attack, the United States expelled 21 Saudi soldiers, and a trainee, after an investigation revealed that they had posted offensive or jihadist anti-American content on social networks.

Clashes break out among STC factions in Aden

#Breaking: #US White House: We will not talk about the measures that we may take…

#Breaking: #US White House: We are awaiting the disclosure of the secret report on…

US warships arrive in Sudan