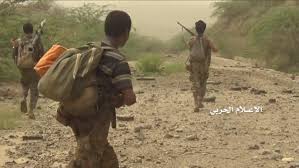 JIZAN, Oct. 2 (YPA) – The military media of the Yemeni army and popular committees on Thursday released video footage show the army forces launch an offensive against positions of Saudi-led mercenaries in Jizan region.

According to the military media, the army forces attacked the mercenaries’ positions at Tabat al-Qumamah .