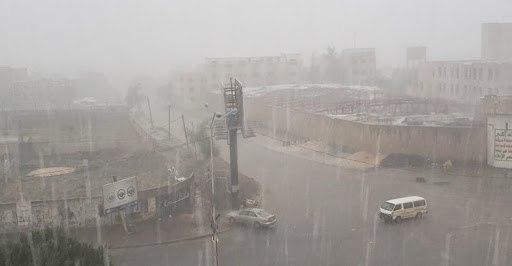 SANAA, July 24 (YPA) – The National Center Meteorology (NCM) has expected cloudy weather with a chance of heavy rainfall in a number of governorates in the next 24 hours.

The center said in its weather forecast that the weather would be partly cloudy to cloudy and light shower on large parts of mountain heights and interior plateaus with activity and strong thunderstorm and dust and sand winds.

It affirmed that the winds might be moderate directional variations on the southern and southeastern coasts on the eastern coasts, while it to be northwest to southwestern on the western coasts.

The center pointed out that the desert areas would witness the clear weather to partly cloudy and with forming separate cells from rainy thunderstorms accompanied with moderate winds.

It warned citizens and drives stay away water gatherings and channels of floods as a result of the heavy rains during the coming hours.

Al-Thawrah Newspaper: The United States Agency for International Development is an enemy wearing a humanitarian hat