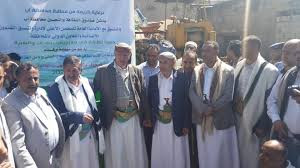 IBB, June 30 (YPA) – The leadership of Ibb province and the local authority condemned the crime committed by the coalition mercenaries against the Subia’an family in the Lower Khashaa area in Wadi Ubaida, Marib province, and seven citizens were killed and others were injured.
The governor of Ibb Abdel Wahid Salah considered this crime that resulted in the martyrdom of Sheikh Mohsen Sbeian and six of his children and brothers, among the black crimes that contradict the customs and morals of the authentic Yemeni society

Salah indicated that what the mercenaries of aggression intentionally bombed and burned down the homes of the Subia’an, should It is matched by a popular and tribal move and booing.

He called on all tribes in general and Marib tribes in particular to take a firm stand regarding this heinous crime, calling on humanitarian organizations to condemn this crime and adopt biased positions with the oppression of the Yemeni people, and the Subia’an family away from narrow accounts.