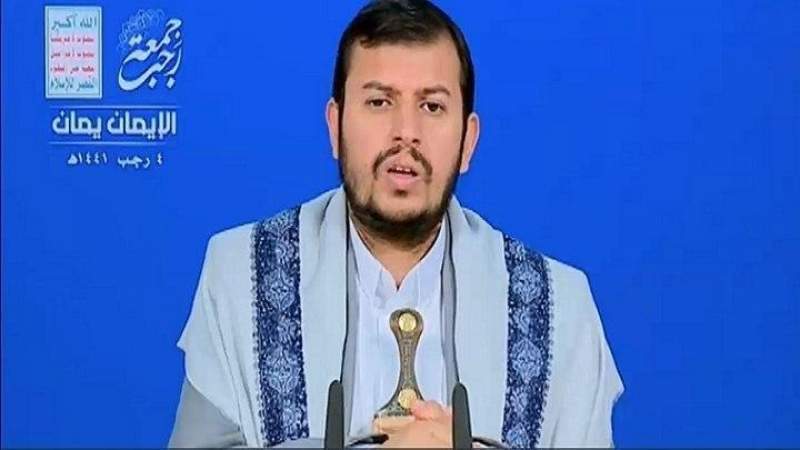 SANAA, Feb. 28 (YPA) – The Leader of the Revolution Sayyed Abdulmalik Badr al-Din al-Houthi on Friday asserted that the September 21 Revolution in 2014 had prevented the Americans from destroying ballistic missiles and completing the long path in weakening Yemen and its forces.

This came in his televised speech aired by Al-Masirah TV Channel on Friday evening on the first Friday of Rajab month, the anniversary of the Yemenis’ convert to Islam, during which he expressed his congratulations to the Yemeni people on this great occasion.

Sayyed Abdulmalik renewed the principled position of Yemeni people in support of the Palestinian people and the nations’ issues.

He called for an economic rising, as that is one of the pillars of the faith identity, in order to achieve the self-sufficiency and liberate from the need for enemies and others in all economic requirements.

In his speech, the Revolution Leader called for the continuation of the liberation battle, advising the Emirati and Saudi regimes to stop their aggression on Yemen.

He stressed that Yemen must be independent, no matter how sacrifices are.

“Yemeni people with their faith identity are able to achieve the complete independence,” Sayyed Abdulmalik said.

He indicated to the US targeting of the Yemeni military capabilities, which represented a weapon to confront any external aggression.

In this regard, Sayyed Abdulmalik referred to the negative role played by Americans through the US ambassador to Sanaa during the era of the former regime.

Sayyed Abdulmalik confirmed that the Yemeni air force managed to develop air defense missiles that excel in their ability on the weapons handed over by the former regime to Americans.