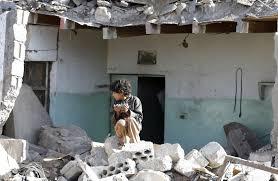 MARIB, Feb. 27 (YPA) – The US-backed Saudi-led aggression coalition stepped up its airstrikes on Marib, Jawf provinces and Nehim district in Sanaa province during February by launching 310 raids, which left over 50 dead and wounded and damage to citizens’ homes and farms.

The aggression coalition warplanes waged more than 70 raids on Majzar and Serwah districts in Marib, destroying dozens of homes, farms and roads, according to Statistics prepared by the office of the Yemeni News Agency (Saba) in Marib.

In Jawf province, the statistics confirmed that the aggression coalition’s aircraft intensified their hysterical airstrikes on public installations, civilian objects and citizen farms in the province by launching more than 147 raids on the districts of al-Ghail, al-Mooon, al-Masloub and Khab Washaf.

The statistics indicated that the massacre of the coalition aircraft in al-Masloub district of Jawf province, which killed 35 people, including 19 children and seven women, in addition to 15 wounded, is considered one of the horrific crimes committed by the aggression coalition since March 26, 2015.
Al-Hayjah village was hit by more than eight raids, according to the statistics.

In a statement issued on Jawf massacre, UNICEF confirmed that 19 children were killed and 18 wounded.

In addition to the hysterical bombardment of the coalition aircraft, the villages and populated areas were subjected to thousands of rockets and artillery shells fired by the coalition mercenaries, in an attempt to revenge after the losses they received in the Al-Bunyan Al-Marsous operation.

The brutal bombing of the aggression coalition warplanes forced hundreds of families to leave their homes and migrate to safer areas, which resulted in great suffering for the families in light of the conditions imposed by the aggression and the siege.

According to the local authorities’ statistics in the districts of Nehim, Majzar, al-Ghail and al-Masloub, More than 3,000 families have been displaced since the beginning of this year due to the escalation of the aggression’s air strikes.

Citizens in Marib and Jawf denounced the aggression coalition’s escalating air raids on their areas and targeting of populated villages with rockets and cluster bombs, considering that war crimes against humanity.