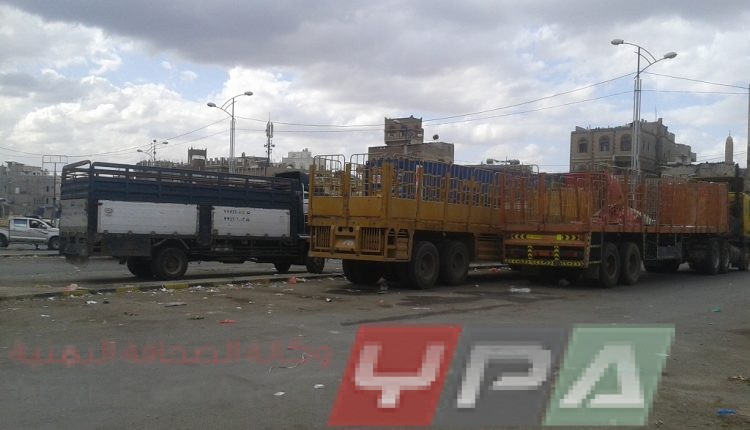 SANAA, Oct. 19 (YPA) – The movement of cargo trucks has stopped almost completely in the capital Sanaa and the besieged Yemeni provinces due to lack of fuel.

Many heavy cargo trucks have stopped in the capital Sanaa due to the fuel crisis resulting from the detention of oil derivatives vessels at sea by Saudi-led coalition for more than two months.

“Trucks are still piling in the parking yard for weeks, including external transport trucks, due to the lack of oil derivatives, as the coalition countries continue to hold the oil ships,” Mohammed al-Hadhrami, general supervisor of the trucks movement office, told Yemen Press Agency.

Ali Mahdi, a storekeeper at a commercial company, said that the lack of oil derivatives had led to a raise in their high prices, which increased the suffering of the Yemeni economy. “The crisis has halted many operations of goods transportation from the ports to the capital Sanaa.”

The rise in fuel prices leads in turn to high costs of internal transport, which increases the price of goods, especially food and medicines, Mahdi added.

He explained that the dealers are suffering from the cost of renting one truck from any province to the capital Sanaa, as one carriage charges reached between 4-6 million riyals for a trip, in addition to the difficulty of finding trucks for transport because many stopped.

In his briefing to the UN Security Council on Thursday, United Nations Under-Secretary-General for Humanitarian Affairs and Emergency Relief Coordinator Mark Lowcock accused the coalition countries of obstructing humanitarian aid access to civilians in Yemen.

Lowcock indicated that Yemen imports almost everything, and the lack of fuel has led to higher food prices by more than double, millions of people from accessing basic commodities. “There may be food in the markets, but fewer people can afford it.”

The continued detention of oil derivatives ships threatens to stop life aspects and movement in the capital Sanaa and the besieged provinces permanently, causing a serious humanitarian disaster.