Over $23 bln losses of oil sector due to coalition aggression: Oil Minister 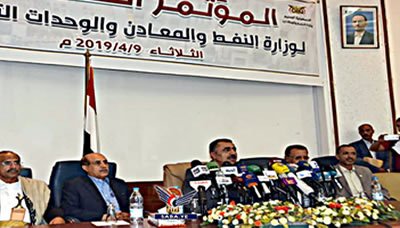 SANAA, April 9 (YPA) -Minister of Oil and Minerals Ahmed Daress on Tuesday said that the cost of losses in the oil and minerals sector due to the aggression estimated at over $ 23.6 billion dollars and 53.9 billion Yemeni riyals until the end of 2018.

“There are indirect losses and damage estimated at billions due to the aggression (Saudi-led coalition war) and siege and attacks on oil installations and fuel stations,” the minister told a press conference held by the ministry in capital Sanaa, noting that the losses are increasing day by day as a result of the continual aggression.

Daress referred that the coalition is holding nine vessels carrying thousands of tons of oil derivatives.

“More than once, the coalition has held oil derivative ships and obstructed their access to the port of Hodeidah, despite obtaining permits from the United Nations,” he said.

He added that the crisis of oil derivatives began to emerge because of the held ships, which would increase the suffering of citizens and would impact on all service sectors such as health, water, transport, agriculture, industry and other vital sectors.

The minister called on the United Nations and all international and humanitarian organizations to intervene urgently to release the ships held by the coalition and to neutralize the oil sector.