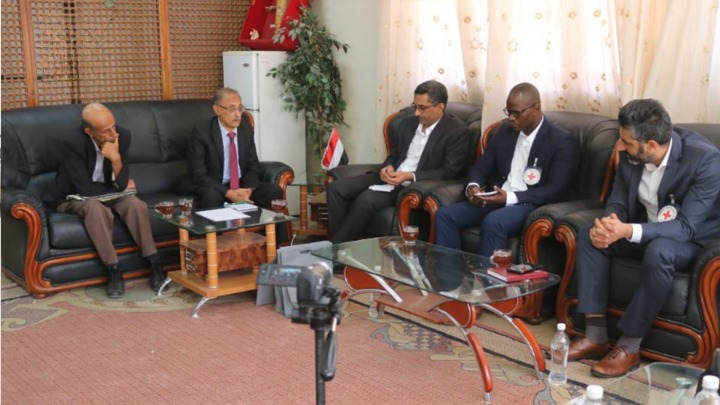 SANAA, Nov. 24 (YPA) – The Minister of Fisheries, Mohammed Zuberi, on Thursday discussed with ICRC’s Relief Coordinator, Timor Bashir, the Committee’s interventions and activities to support the fisheries sector and fishermen in Hodeida province.

The projects that have been implemented in the province, including a project to rehabilitate coral reefs, and support the fishermen families affected by the aggression in the field of livelihoods, fish inputs, and the rehabilitation of the fishing port, were reviewed during the meeting.

The meeting touched on the possibility of the ICRC’s support for establishing a health unit for fishermen in the port of Hodeida, and establishing a research center for fish farming, hatcheries, and two factories for smoking and freezing fish.

In the meeting, the Minister of Fisheries appreciated the ICRC’s efforts and its projects implemented during the past year, urging the expansion of its activities and interventions to include several economic, fishery and humanitarian projects, especially in light of the current conditions.

For his part, the ICRC’s official noted that these projects would be followed by other economic projects in the fish aspect, support for fishermen, the capabilities of fish associations and coastal women, and other activities during the next year, 2023.