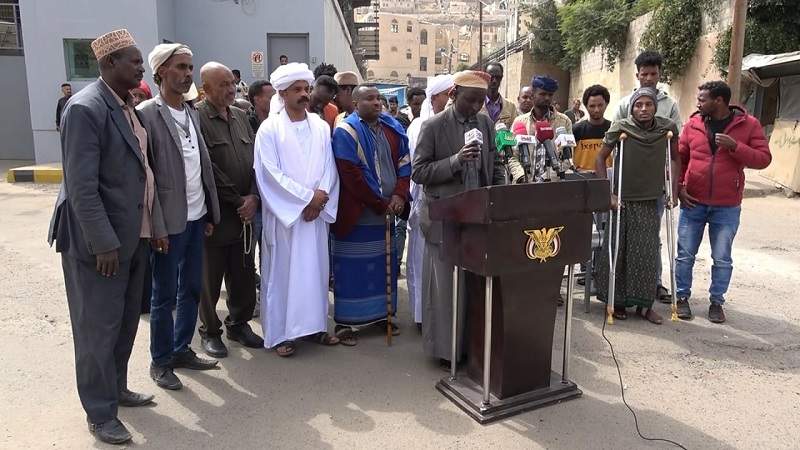 SANAA, Nov. 22 (YPA) –  African communities organized a press conference on Monday in front of the United Nations office in the Capital, Sanaa, in the presence of a number of wounded Africans who were wounded by Saudi forces’ fire.

“The African migrants were subjected to the most severe types of torture until death, including electric shock, beating with heavy tools, and direct targeting with live bullets by the Saudi regime forces,” the head of the Coordination of Refugee and Migrant Leaders in Yemen, Abdullah Al-Laithi, explained in a speech.

“It is not strange for the Saudi regime, which kills the children and women of Yemen, to target immigrants at the borders,” Al-Laithi added.

He pointed out that some of the survivors of the brutality of the Saudi forces are receiving treatment in the hospitals of the International Organization for Migration, which did not move a finger and did not issue a statement of condemnation, despite being informed of what is happening in the Saudi borders.

He called on everyone with a living conscience to work to uncover Saudi crimes, calling on international organizations to open investigations into these crimes.

He called on the Ethiopian federal government to open an urgent investigation into the massacre committed by the Saudi regime against immigrants at the border.

For his part, the head of the Somali community in Yemen, Ibrahim Muallem, said that what the Saudi forces are doing in terms of killing and torturing migrants indicates the corruption of the Riyadh regime, which sheds the blood of innocent people and enjoys killing them.

Muallem condemned what immigrants were subjected to at the border by brutally killing them at the hands of the Saudi forces. He appealed to African countries to investigate the crimes of the Saudi regime.

#Breaking: #Hodeida: A child was seriously injured due to a landmine explosion