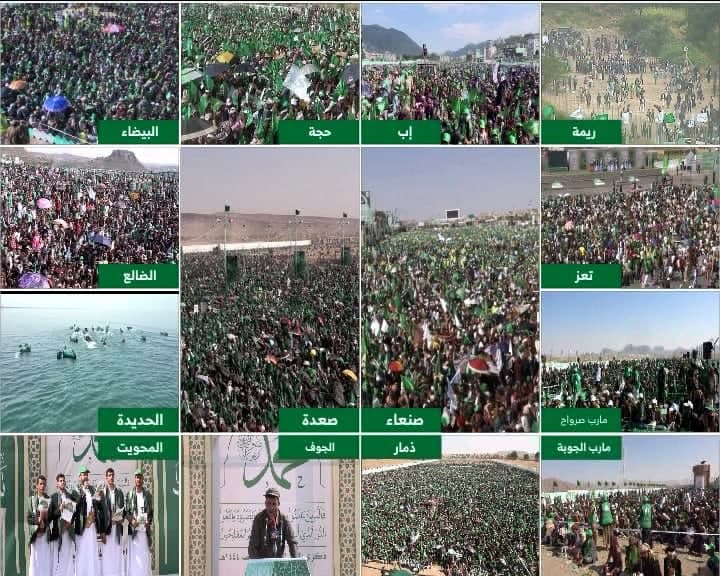 PROVINCES, Oct. 08 (YPA) – Millions of Yemenis flocked on Saturday to the squares in the capital, Sana’a, and the provinces to celebrate the Prophet’s birthday anniversary (peace be upon him).

The participants carry green and white flags and the occasion slogans and banners with the words of welcome, love and loyalty to the Messenger of Allah, Mohammed (peace be upon him).

The Leader of the Revolution, Sayyed Abdulmalik Badr Al-Din Al-Houthi, had called in a speech during the inauguration of the celebrations of the Prophet’s birthday anniversary, to take care of the mobilization for the grand event on Rabi’ Al-Awwal 12, stressing that the massive attendance on this great occasion sends a warning message to the enemies of the Messenger of Allah that this nation strengthens its connection with the Greatest Messenger.

The organizing committees completed preparing dozens of major squares in the capital, Sanaa, and 14 free provinces to receive the millions of people celebrating the Prophet’s birthday anniversary, whose activities will be launched simultaneously this afternoon.

US Senator: Saudi Arabia is one of worst human rights violators in world