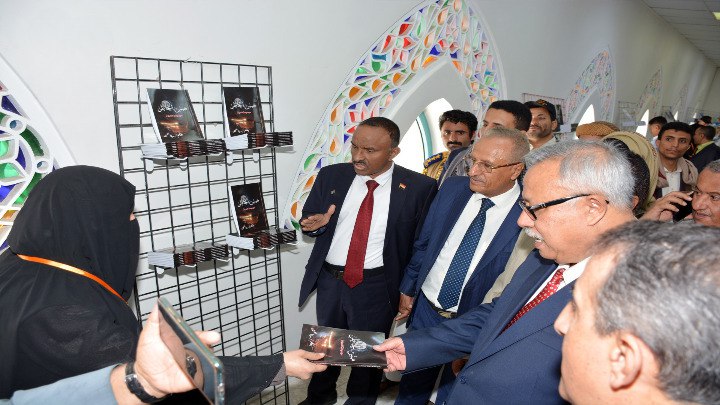 During the inaugurating to announce the first project of the Poets Foundation on the Window of the World for Culture and Creativity, by printing versions of 43 Yemeni poets and writers, Bin Habtoor considered the great poet Al-Baradouni one of the most important poets in the Arab world, distinguished from many of them by combining revolution, poetry, literature, thought and political stance.

He pointed out that this stature deserves to raise his image high to be a shining beacon for this generation and future generations, adding that Al-Baradouni is among the dozens of great poets who wrote a great and wide experience such as Al-Maqaleh, Al-Mihdar, Jaradah, Nu’man, Al-Sharafi, and many others who paved the way for this group of poets to continue their journey.

“The path of our lives with its bright and creative side cannot stop as long as we have a poet, poet, creator and creator with souls embracing the sky in a moment of solid resistance.”

He continued: “Today we live in the shadow of aggression and siege, yet we innovate and write, and some take the initiative to collect money so that young men and women can print their creative works.

Bin Habtoor thanked everyone who did not give in to despair or to aggression and siege, and for these brave souls who continued standing and continue the struggle for the words of poetry to be raised high in the sky of Yemen.

The Prime Minister touched on the suffering of the generation in the present era that the world does not realize, as a result of the US-backed Saudi-Emirati aggression and siege, which formed a cordon to prevent the arrival of medicine, food and electricity to the Yemeni citizen.

#Breaking: A Citizen was injured by a #Saudi-led coalition sniper’s fire in…

#Breaking: A citizen killed as a result of explosion of landmine in #Marib

#Breaking: #Sayyed Abdul-Malik to speak today on occasion of anniversary of September…