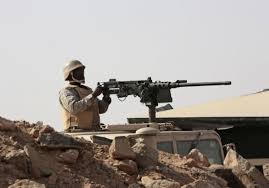 MAHRA, Aug.03 (YPA) – The Saudi-led coalition forces imposed on Wednesday a military cordon on the city of Al-Ghaydah, the Mahra provincial capital, in eastern Yemen.

According to eyewitnesses, the coalition deployed dozens of militants with military vehicles during the past hours at the entrances and exits of the city and along the coastal road.

The sources considered the military deployment a real threat to suppress the healthy tribal movements against the presence of US and British forces and a number of Emirati and Saudi officers at Al-Ghaydah Civil Airport.

During the past few days, the tribes of Mahra announced that they would stand united with the head of the anti-foreign occupation sit-in committee, Sheikh Ali Salem Al-Huraizi, after his house was stormed last week in Maheif area.

Sheikh Al-Huraizi vowed to respond to storming his house in a timely manner, calling on the sons of Mahra to unite their ranks in the face of foreign presence.

The coalition forces are seeking to detonate the military situation in Mahra, which is far from the confrontations with the Sanaa forces, to eliminate the moves against the US-British project, amid Saudi efforts to extend the oil pipeline from its territory to the Arabian Sea passing through the province.

The coalition imposed its military control over Al-Ghaydah Airport at the end of 2017, turning it into a military base on the Arabian Sea.

8 ones killed due to torrential rains in Hajjah