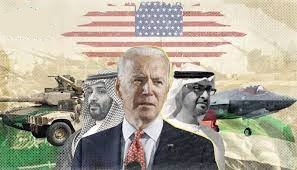 SANAA, July. 02 (YPA) – The blood of Yemenis has exposed Washington’s tricks by exploiting international law in support of the Saudi-led coalition’s war on Yemen and covering their crimes committed against the Yemeni peopel for nearly 8 years.

Since 300 years of the founding of America, this country has not committed even the slightest amount of credibility in its international dealings and relations, according to an analysis issued by Yemen Press Agency.

The country that appeals to a great legacy of utilitarian demagogy as a colonial method adopted by the United States in its foreign policies.

In general, the American position on Yemen war is biased and supportive of the coalition countries, as Saudi Arabia and the rest of the Gulf countries do not have their own independent decision, as they are governed by directives they receive from Washington about what they should do. Implementation for the Gulf countries, especially Saudi Arabia.

The decision of war on Yemen was not an ordinary one and taken in Washington, and the signal for implementation was given to the Gulf states, led by Saudi Arabia.

America has robbed many large countries of their national decision about the future. For examples, Germany and Japan are known their economic might as the most powerful economic power in Europe and the world where their sovereign decision is under control of the United States of America. The US military bases has been still located in Germany and Japan since World War II, so what does that mean? It is an undeclared occupation, and the situation applies to the rest of the European countries, such as France, the Netherlands, and Britain. All of them do not have their own independent national decision, far from American directives and interventions.

“It is an evil country, if you approve it, would impose obligations on you beyond your capabilities, and if you take a hostile stance from it, the world would condemn you.”

Now, what the Russian-Ukrainian war has imposed heralds the demise of the American era, the end of unipolar hegemony, and the emergence of a strong pole based on China and Russia, which would serve as a lifeline for the rest of the world from American hegemony.

Ministry of Interior reveals security achievements during the past Hijri year

Report: Over 551.8 billion Y.R from oil and gas revenues looted during armistice