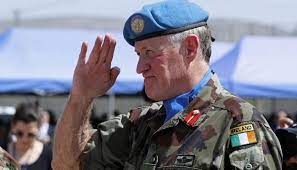 SANAA, May 24 (YPA) – The head of the United Nations Mission to Support the Hodeida Agreement (UNMHA), General Michael Beary, has praised the great efforts by the Sanaa government for its commitment to the Sweden truce in Hodeida province.

This came during a meeting held on Tuesday with members of the national team in the Redeployment Committee to discuss the Saudi-led coalition’s violations of the UN-brokered humanitarian and military truce and the work of the UN mission in the province.

Beary said “that his team is facing difficulties in working with the other team in order to promote peace between the two parties.”

For his part, the head of the national team in the Redeployment Committee, Major General Ali Hammoud Al-Mushki, said “that the essence of the truce is the humanitarian aspect, and the coalition countries and their tools in the region are still holding oil and food ships, indicating that the coalition’s violations have not been stopped since the announcement of the humanitarian and military truce in the West Coast.

He affirmed that the United Nations and the international community held full responsible for every drop of blood shed in Hodeida to absolve them of their responsibilities for support the mine centers.