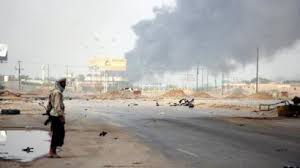 PROVINCES, May 13 (YPA) – The US-backed Saudi-led coalition forces and their mercenaries committed 108 violations of the UN-announced humanitarian and military armistice, during the past 24 hours.

A military source said that the violations included 32 flights of armed reconnaissance and espionage aircraft in the airspace of Marib, Hajjah, Jawf, Saada, Taiz, Bayda, and Dhalea provinces, and on the fronts beyond the border.

The source confirmed that the coalition mercenaries established combat fortifications in the surrounding of Marib city.

The source pointed out that the coalition forces committed 12 violations with firing artillery and tank shells at the homes of citizens in the village of Al-Zour and the sites of the army and the popular committees in Al-Rawdah, Serwah and Al-Balaq areas in Marib.

The coalition mercenaries also targeted, with artillery, the positions of the army and committees in Al-Mazraq in Hajjah, and Al-Fakhida and Al-Amoud areas in Wadi Jarrah in Jizan region.

The source stated that 63 violations with shooting at citizens’ homes and positions of the army and popular committees were recorded in the provinces of Hajjah, Marib, Saada, Hajjah, Taiz, Dhalea, and Bayda and the fronts beyond the border.