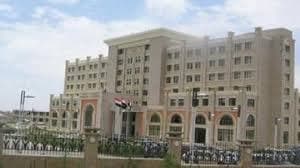 SANAA, Oct. 09 (YPA) – Ministry of Foreign Affairs considered on Saturday the failure to extend the mandate of the United Nations Group of Eminent International and Regional Experts on Yemen, an step for undermining of efforts to establish peace in Yemen.

The ministry affirmed in a statement that the treasury of the coalition countries removed Saudi Arabia from the list of shameful violators of children’s rights, ending the work of the UN team of eminent international and regional experts on Yemen.

The statement expressed the National Salvation Government’s appreciation for the positions of the countries that voted in favor of the draft resolution to extend the mandate of the group of experts, which is the only international mechanism that investigates human rights violations and the crimes committed by the aggression coalition in Yemen for more than six years.

It pointed out that Saudi Arabia has been seeking, since the beginning of the war on Yemen, to prevent the formation of any independent international investigation mechanism to investigate its crimes committed in Yemen, using all means of carrot to achieve that.

The Ministry’s statement confirmed that the coalition countries have committed the most heinous war crimes against the Yemeni people that have never been seen before in modern history.

It pointed out that the termination of the work of the UN team of experts represents the green light for the coalition countries to continue committing crimes against Yemen, land and people, without accountability or punishment.

Al-Houthi: People of Marib province have become very vigilant and ready to take…