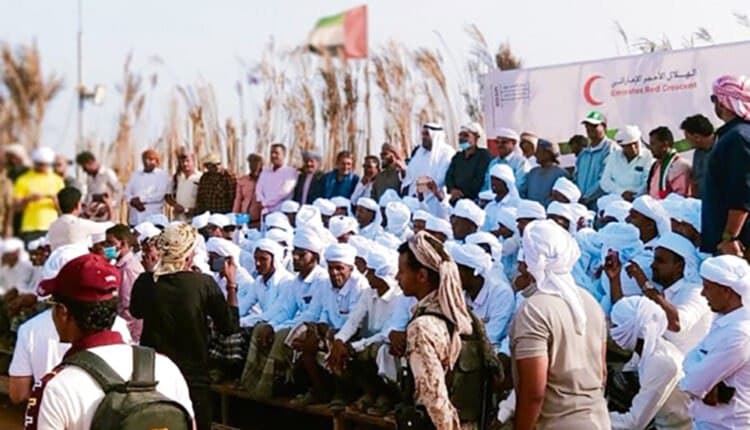 Share
SANAA, Sept. 22 (YPA) – Several documents have exposed the suspicious activities of the Emirates Red Crescent’s team working in Yemen under the banner of humanitarian work.

The documents revealed suspicious activities carried out by special units operating under the banner of humanitarian action to carry out intelligence and military tasks in Yemen since the start of the war led by the Saudi-Emirati coalition, in the framework of Abu Dhabi’s conspiracies to perpetuate the occupation of the country and plunder its wealth.

They showed that Emirati and Yemeni agencies have carried out military, intelligence and media operations to buy loyalties and to support a militia established by Abu Dhabi in more than one province.

It highlighted Abu Dhabi’s efforts to stop the inspection of sea and air flights carrying military equipment and intelligence services, and to stop the efforts of officials at the ports to subject these flights to monitoring.

The documents also showed that Abu Dhabi is seeking to target leaders and officials who reject the Emirati agenda in Socotra and the western coast of Yemen, and oppose its policies.

According to the documents, UAE carried out dozens of operations, which it described as “special”, in the provinces of Aden, Lahj, Abyan, Socotra, Taiz and the West Coast, and paid more than 130 million Saudi riyals, in addition to carrying out kidnappings.

Additionally, Abu Dhabi is exerting more efforts to target the director of Socotra port, Riyad Suleiman, one of sheikhs of the province, Issa al-Saqtri, and the leader in the Tihamiyah forces, Ahmed al-Kawbani, weakening the military brigades of Hadi government, as well as continuing to attract social figures and military leaders, and training intelligence elements in more than one various provinces.

It continued: “There are three organizations funded by UAE that worked to employ foreign nationals without obtaining a work permit from the Ethiopian government for more than 6 months.”

The documents explained, “Doctors Without Borders has imported and used radio and satellite communication devices without obtaining permission from the competent authorities, as members of the organization were arrested by the security forces for using devices for illegal purposes.”

Iranian Parliament Speaker: “We are now standing on Israel borders”

Saudi Aramco is the most polluting company on earth: “Forbes”