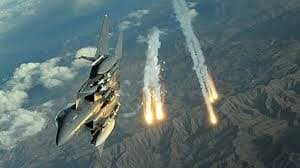 The official affirmed that the warplanes waged six separate raids around the city of Saada, and two others on Bani Moath area of Sahar district.