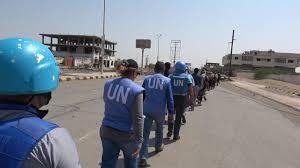 HODEIDAH, July 2 (YPA) – Violations of Sweden Agreement ceasefire breaches in Hodeidah escalated in an unprecedented way during the month of June, to reach a record number.

A source in the Liaison Officers Room to monitor the ceasefire in Hodeidah revealed that “the coalition forces committed more than 2,667 violations during the month of June.”

The source in the liaison room, in which UN observers participate, said: “Between the coalition breaches, 53 warplanes and 101 spy planes flew over Hodeidah.”

He added: “The breaches of aggression included the creation of 28 combat fortifications on various fronts of Hodeidah and the implementation of 10 infiltration attempts in Kilo 16 area, Al-Faza and Hayes, which failed.”

The source explained that “the breaches of aggression included more than 598 missile and artillery bombardments, including 8005 rockets and missiles and 1877 violations of various bullets.”

It is noteworthy that the coalition and its gunmen, according to the liaison officers’ operations room, “committed on Wednesday, 82 violations of the Swedish agreement, which included the flight of five warplanes and spy planes in the airspace of Hays, Manzhar, Kilo 16 and Khamseen Street.”