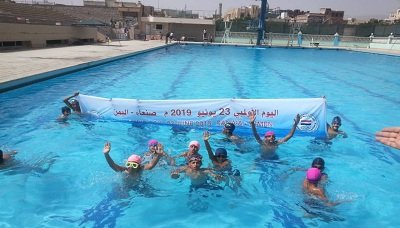 SANAA, June 23 (YPA) – The Yemeni Olympic Committee on Sunday celebrated the World Olympic Day by organizing sports activities in the capital Sanaa and in Sayoun city of Hadramout province.

The celebration program, which was attended by Secretary-General of the Committee Mohammed Al-Hajri, included organizing a competitive activity with participation of 300 promising athletes in eight centers of the capital for various games, including Gymnastics, swimming, wrestling, Judo and tennis, as well as shows for players of Gymnastics Taekwondo and Wushu.

The program also included delivering lectures by members of the National Anti-Doping Committee on rules and benefits of sport.

Sayoun city also witnessed on this occasion holding sports competitions in the games of football, basketball, volleyball and chess.”